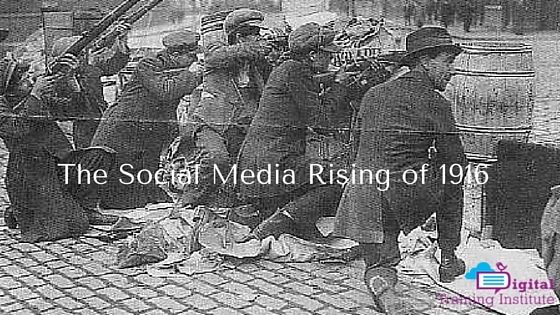 I’m a news-hound. I guess it’s the journalist in me. My husband says, ‘once a journalist, always a journalist.’ I consume news practically all day from waking up to my clock radio at 7am with Cathal MacCoille from Morning Ireland reminding me what day it is and wishing me a ‘very good morning’, reading news from Twitter links, listening to news shows on the radio in the car, to finally receiving mobile notifications from The Irish Times, Irish Independent and TheJournal.ie.

What if social media was around in 1916? How would the Easter Rising have been reported? 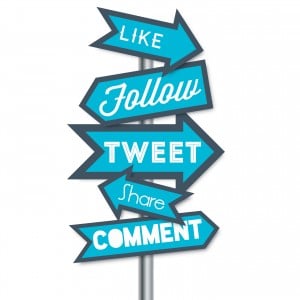 So I’m jumping into my virtual social media time machine and I’m going to try to take you back to 1916 in Ireland and social media was as popular then as it is now. Here goes….3.2.1…

Hanna Sheehy was born in 1877, in Kanturk Co. Cork. She grew up in a family with deep Republican connections, with her father being imprisoned many times for his republican activities with the Irish Republican Brotherhood. When she was 10, Hanna moved to Dublin along with her family, and later attended St. Mary’s University for Women. At the time, women were not allowed to attend the same lectures as men in UCD or Trinity College, they were however allowed to sit the same exams. Hanna graduated from St. Mary’s, obtaining a Masters in French and German from UCD in 1902.

It was during her time as a student in Dublin that Hanna met her future husband, Francis. Francis was hugely active in politics at the time and was a figure who inspired controversy, having a long unkempt beard and proudly displaying a badge that said “Votes for Women”. In 1903, the two got married and in accordance with their strong belief in equality for the sexes, they decided to combine their last names into Sheehy Skeffington.

They were both active on social media and used the technology to grow a community of like-minded activists with whom they would have meet-ups with regularly in the city.

Hanna was working as a teacher in Eccles Street School, and part-time as an examiner. Both her and her husband were involved in branches of the Irish Parliamentary Party and were active in campaigning for Women’s Suffrage across the United Kingdom. In 1908, Hanna became secretary of the Irish Women’s Franchise League. Much of their work was spent petitioning the Irish Parliamentary Party to support the call for women’s enfranchisement, which John Redmond was persistently refusing. Hanna served her first prison sentence in 1912, when she and others in the Irish Women’s Franchise League took direct action and broke windows and fixtures in the GPO, Dublin Castle and the Custom House.

This event in Hanna’s life saw her social media presence go viral and her online community quadruple. Her solid community who believed in what she believed work arduously for her while she served her sentence, so much so when she was released, she found that much of her evening time was spent responding to messages of support and offers of help in her campaign. 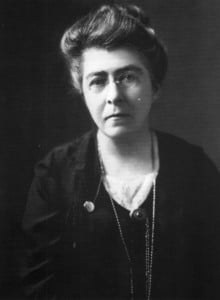 Welcome to the Social Media Rising

It’s Easter Monday in Dublin. Hanna Sheehy Skeffington brings food supplies to the soldiers at the GPO. Hanna is community manager moderating all their social media accounts, promoting the cause of the Rising soldiers and acting as a messenger to the rebels’ families. All traditional telecommunications signals going to and from the GPO have been blocked, so Hanna is providing the single channel of communication.

Under the Defence Against The Realm Act crown forces have placed a temporary block on the WhatsApp messaging service, to hamper the rebels’ communications leaving Hanna’s channels as the only means of communication between the rebels and the world.

At the beginning of the week women, medical staff and priests are all allowed through the barricades, so this gives Hanna an opportunity to sidestep the communications block.

Hanna manages a private Facebook Group of which the rebels and their families are members. She is also running the @riseupÉire Twitter account and the hashtag #rising16 is trending in Ireland. She posts photos from the city as streets empty and behind the locked doors of the GPO she live streams some of the soldiers stories – why they are there and what #rising16 means to them.

Social media provides an invaluable voice to the soldiers and their families as they maintain their stand at the GPO on Dublin’s O’Connell Street. Back in the tenement buildings across Dublin family members wait patiently for live updates from citizen journalists just like Hanna brave enough to roam the streets of the city centre.

On Easter Monday at midday Hanna records a live video on Facebook of Pearse reading the proclamation and it’s getting a mixed reaction. 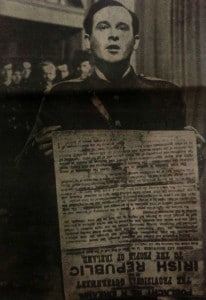 Later on in the afternoon Hanna decides to live broadcast the scenes from the GPO on Periscope via Twitter from inside the locked doors as a way of showing the British Army that the resolve of the rebels is strong and unwavering.

She uploads a video of The O’Rahilly singing one of his own songs to keep up the spirits of the rebels. 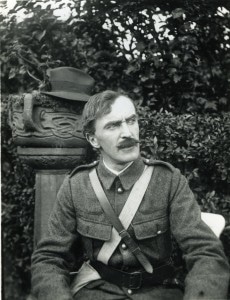 Through knaves may scheme and slaves may crawl
to win their master’s smile,
and though thy best and brave fall,
undone by sexton guile –
Yet some there be, still true to thee,
Who never shall forget.
That though the chains and slavery
Thou art not conquered yet!

That evening Hanna has dinner with her husband Francis and their son Owen and before they wrap up for bed, they take a family selfie which Hanna shares with her community on Facebook, Twitter, Instagram and Snapchat with the caption – Rise up for your family, for their future.

On Tuesday Hanna updates rebels and their families via the private Facebook Group, Francis decides to take action himself. He attempts to organise a militia to stop the looting in Dublin and restore some order to the city.

On the same day Plunkett sends two engineers to the wireless school of telegraphy (now the grand central pub on O’Connell Street) to send out a YouTube video to let the world know that a rebellion has started. Hanna witnesses the two engineers trying to hack into the hard line Internet of a building close by in order to get their video message uploaded onto the video sharing platform.

On his way home Francis is arrested and brought to Portobello Barracks. There he, and two journalists, are held without charge by the British Army. Hanna gets concerned when he hasn’t returned by midnight and goes online to seek help from her community to track any sightings of him.  A number of direct messages on Twitter indicate that Francis is in fact not safe.

As a way of trying to find her husband and also helping other families caught up in the fighting, Hanna calls for Facebook to launch their ‘Safety Check’ feature so that those involved in the fighting across the city can check in and let their loved ones know they are alive.

Early on Wednesday morning Francis manages to send a message to Hanna telling her that he has been imprisoned and is fearful for his life. He records a video and posts it on their private Facebook Group calling for peace. This is the last time Hanna hears Francis’ voice or sees his face.

Later that morning all three prisoners are shot on the orders of Captain Bowen-Colhurst.

This story was based on elements of a true story re-told by Stories from 1916. Read Hanna’s story here.

WATCH: Dublin Through The Lense Over 100 Years by Vivify Multimedia

No doubt avid social media users will be using the hashtag #rising16 across multiple social networks and contribute to the historical debate as part of the Easter Rising celebrations. I’ve been teaching my 6-year old son Bobby about it. We got our own copy of the proclamation two years ago following a meeting in Government Buildings with the former Minister for Education Ruarí Quinn. My daughter Sophie and I met him to discuss integrating digital citizenship into the primary and secondary curriculum.

As the country commemorates those who lost their lives 100 years ago to create the Irish Republic, I think about how we use social media today to tell stories. I wonder about our personal responsibility in the Digital Age to make a difference by sharing stories worth telling on the social web.

Do we all have a social responsibility to be a voice for good? This leads me to my work on digital citizenship and promoting the safe, savvy and ethical use of the Internet. Later this year Ireland’s first Digital Citizenship Summit takes place in Dublin – Saturday September 24th. We are bringing the vision of Marialice Curran and David Polgar to the Emerald Isle as my daughter Sophie and I continue to use social media for good – to empower, educate and enhance digital lives.

Make your digital mark in 2016 – share stories worth reading.

Finally, be inspired by Danny O’Reilly from The Coronas who has joined forces with his sister Róisín O’Reilly and cousin Aoife Scott to record a very special version of “Grace” in Kilmainham Gaol as part of the centenary celebrations.

I would like to thank Steven McDonagh, Vivify Multimedia and creator of the 1916 Audio Trail app for his historical references in this blog post. The 1916 Easter Rising Audio Trail will guide you through all 16 Dublin City Centre locations that are connected to the Easter Rising. From the assembly point at Liberty Hall to the Burial plots at both Arbour Hill and Glasnevin. The app gives detailed audio descriptions of the events that happened at each location accompanied by photos of what the locations looked like in 1916.