Did you hear about the social media earthquake that struck the Aviva Stadium this week? Well unless you’ve been sitting under a Twitter rock then you will have surely felt the buzz enveloping the country.

I’ll give you the back-story before I give you my take on an amazing two days of ‘social-media-ising’.

Once upon a time Samantha Kelly, the Tweetinggoddess had a dream to bring the greatest and most respected social media influencers to Ireland so that we didn’t have to travel to see them Stateside.  Because that’s what you had to do if you wanted to get up close and personal with the guys you followed, engaged with online and simply studied with a microscope.

She joined forces with Tom Williams of Platinum Events as her event partner to create Social Media Summit.

Samantha had her doubters, reluctant participants, onlookers from afar, but she also had a community. Her community. One that she has been building for the past three years, day in, day out, outside of 9-5 and constantly asking them ‘what can I do for you?’

So in November 2015, a mere five months before a major business conference, Ireland’s inaugural Social Media Summit was announced and she gave me, each of the other speakers and almost 300 people two days to remember.

The Buzz Was Off The Richter Scale

The first person to buy a ticket was Marie Collins from Cork. A digital marketing solo entrepreneur who was a fan of Samantha’s but more importantly a member of her community.  As it turned out, Marie got the money back for her ticket because she offered to help out to make this event a reality. “Sure give me the Twitter login details and I’ll give you a hand,” she quipped. Well let me tell you, it was more than two hands Marie needed over the past two days as #smsummitIRL trended on Twitter in Ireland but also in the United States and on #SuperTuesday! Seriously?

It’s not easy to take a leap of faith and create something to benefit so many others while you take all the risk. Is it? So why do it? “I had a vision and I believed my community would react, embrace it and that social media would be the vehicle to help me make this happen,” – I have a quick chat with Samantha on a taxi ride to the Summit reception in Dublin City Hall on the eve of the first day – and I can see the stress in her face. I felt bad that I was so excited and she was feeling so anxious. I reassured her and as I write this blog post I hope she takes a few steps back and looks at what she’s created. It’s not cool in Ireland to slap yourself on the back. But sometimes, probably more than sometimes, that’s exactly what we need to do for ourselves. Cue solo bear hugs.

You see visionaries make things happen. Believers bring supporters along with them, and good things happen to good people.

While almost 300 people attended the Social Media Summit over two days and listened to over 50 experts from all aspects of the broad social media spectrum, there was one key message that emerged for me.

“People react to stories, which are driven by social media to create a loyal community. Conversations convert leads into customers and like-minded individuals will follow and buy from you if you add value to their lives and they trust you.” – JSB

This my friends is the secret sauce that the Tweetinggoddess has been spreading for the past three years and this is why she turned her dream into a reality this week.

“While I look up to others, I should really also look up to myself. You see I always I had the power, I just needed to realise it.” – JSB

There was a weirdness about the common thread that weaved the speakers’ stories together. I felt uplifted, not alone in my business anymore, enthused to just do what I believe I can and felt fearless.

I leave Dublin to return to my family in Galway with action in my heart, in my head and in my intentions. I have failed to act on my gut in many ways in my business as I battle with my own lack of confidence. Hence the red shoes.

Samantha brought experts who are just like me and you – mothers and fathers, sons and daughters, entrepreneurs and employees together – they like all of us want to succeed in our professional life in order to accentuate our personal lives.

On the first morning of the Social Media Summit there was an air of apprehension that quickly evaporated as Melonie Dodaro made her mark on the richter scale that would calculate a social media quake of “off the richter” scale in Ireland for the very first time. But as I left on the evening of day two the positivity was palpable.  I know many people left with actionable insights, a new-found focus, confidence to just do it and a realization that they just like those on the stage could in fact manifest a willingness into action. 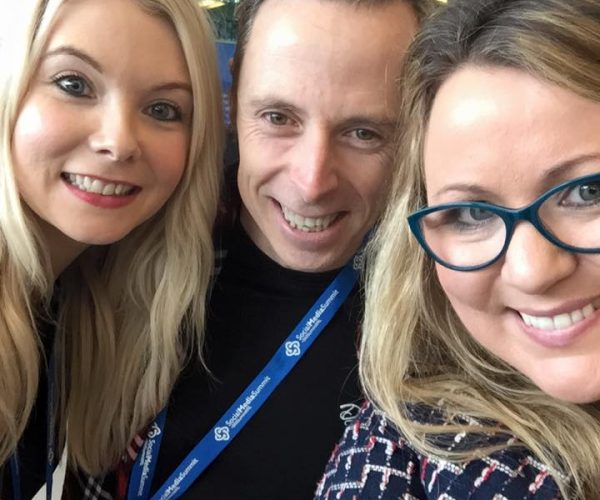 To every single speaker that I had the pleasure to meet – you know who you are – I’ll save your greatness for my next #smsummitIRL tips blog post – thank you for your conversation, comradeship and craic. I look forward to more digital and hopefully soon ‘in person’ conversations.

Digital PR: How To Master The Media Online In 8 Steps

If you want to access my own Digital PR workshop you can do so below.  A big shout out to everyone who sent me kind tweets after the presentation. I felt the love!

I’ve decided to share with you my key takeaways from the two days.  So this I will do in another blog post. For now, I’m going to have some much-needed thinking time as directed by Jack Murray of MediaHQ and Ted Rubin.

Finally I want to say, thank you Samantha for dreaming big and making it happen for all of us. I can’t wait until next year’s event. Where can I buy my ticket? Because I ain’t missing Joel Comm!