In this episode I bring you voices from Ireland and the EU Parliament about Brexit. 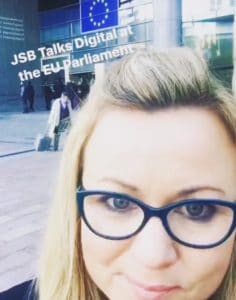 Not only that, but its community of users is growing rapidly! In fact, they have grown by 50 million since January and now boast 200 million daily users!

So what are the new Insta Stories features?

Jump over to @jsbgrams to see how I am using these cool new features on Instagram Stories.

LinkedIn has announced what it’s calling ‘smarter messaging’ on the platform. Did you know that since InMail messages was established 500 million messages have been extended? Messaging, or dark social as it’s known in the industry, is growing in popularity and it has certainly killed the text message!

LinkedIn says it’s seen a 40 per cent increase in messaging in the past year and that about half of its 467 million members are now use messaging.

So LinkedIn are jumping on this trend and using it to help users connect with people who are recruiting.

The new smarter messaging experience gives users the ability to message a connection from wherever you may be on LinkedIn, along with suggestions that can help connect you to a new job.  This update is for desktop only.

Watch the video on the blog associated with this podcast.

When will companies learn that managing a PR crisis on social media needs to be handled delicately and with care?

Well United Airlines, it seems, needs a few lessons on this subject for both its passengers and its social communications.

Following the incident which saw a male passenger forcibly removed from a flight bound to Chicago from Louisville, the Internet went crazy. In-flight passengers recorded the incident and immediately took to Twitter and other social networks to share the inside story from Flight 3411.

The airline responded saying the flight was overbooked and they were within their right to ask passengers to give up their seats. But dragging a man from his seat causing concussion and broken nose resulted in their share price taking a nose-dive of within hours of the news going viral. The total losses were reported to be in the region of €1 billion dollars.

The sage continued for United Airlines when its CEO Oscar Munoz wrote an email to his company saying the removal of the passenger was conducted according to company guidelines.

This added fuel to the raging social media fire when it emerged and the company had to grapple its way through one of the biggest social media PR crises in recent times.

The 15-second ad features a man in a Burger King uniform leaning into the camera before saying, “OK Google, what is the Whopper burger?” This then activates the Google Home device to to read a long-winded description of its Whopper burger from Wikipedia.

And guess what? It seems the Burger King CMO, Fernando Machado, also recently edited the Wikipedia ‘the Whopper’ entry to read The Whopper is the signature hamburger product sold by the international fast-food restaurant chain Burger King.

That my friends, is what you call a whopper of an Internet hack!

In today’s show I bring you interviews from the EU Parliament in Brussels and sound-bites from a Brexit public meeting in Galway organized by Deputy Hildegarde Naughton.

Be sure to listen to the soundbites.

Prime Minister Teresa May has now triggered Article 50 and in fact she did this the day I was in Brussels, delivering training in the EU Parliament.

Ireland has a unique interest in Brexit.

Ireland is the only EU country with a land border with the UK. They are also a major trading partner. Did you know €1.2 billion of goods and services are traded between Ireland the UK every week which directly supports 400,000 jobs in both countries?

This in itself demonstrates the economic ties between our closest neighbour as outlined by Deputy Hildegarde Naughton.

Minister for Foreign Affairs Charlie Flanagan has been the key spokesperson on how Brexit is going to impact Ireland. Minister Flanagan says that Ireland must show a steely determination to get the best outcomes for Ireland in economic, tourist, and cultural terms all while stressing Ireland’s unique position as the only country with a land-border with the UK.

During a recent trip to the EU Parliament where I’m delivering social media training, I caught up with Irish MEP Sean Kelly. I asked him about the impact of Brexit on Ireland and what the Irish Government are doing to minimize the negative impact and maximize any positive impacts.

In today’s column, I talk about the role of social media in Brexit – pre and post vote.

Social media certainly played a role in the final outcome of the Brexit vote. Ultimately, the leave side had more vocal and active supporters across almost all social media platforms.

Not only were there twice as many Brexit supporters on Instagram, but they were also five times more active than Remain activists

Research undertaken by Vyach-eslav Polonski, a Network scientist at the University of Oxford analysed 30 weeks of data from Instagram.

They analysed over 18k users and 30k posts.

The same pattern was found on Twitter. They discovered that the Leave camp outnumbered the Remain camp 7 to 1.

The online momentum of the Leave camp was equally evident in the support they received from the community.

On average, Instagram posts from the members of the Leave camp received 26% more likes and 20% more comments, while the most active users in the dataset were also all campaigning for a Leave vote.

Furthermore, the top 3 most frequently used hashtags in the data come from the Leave camp and were well integrated into all networked conversations online: #Brexit, #Beleave and #VoteLeave.

Using the Internet, the Leave camp was able to create the perception of wide-ranging public support for their cause that acted like a self-fulfilling prophecy, attracting many more voters to back Brexit.

Following the triggering of Article 50 by Prime Minister May, there was a marked spike in hate speech on social media.

A dramatic rise in hate crime after the Brexit vote led police to take measures to protect vulnerable communities in anticipation of a similar surge in violence this week.

Matthew Williams, co-director of the Social Data Science Lab at Cardiff University, said he had observed an increase in online hate speech on the day the Government officially announced its intention to leave the EU.

Speaking to the Independent in the UK, Professor Williams said, they software designed to monitor hate speech showed there was an increase in hate speech on March 29th.

“It is worrying. We’ve entered into what I’d say is a new darker phase when it comes to relations with minority individuals in the UK, whatever minority they may be,” he said.

“I’ve seen prejudice being expressed towards individuals from other countries in Europe, but it’s also people from countries outside Europe. There’s been lots of anti-Muslim sentiment and a spike in homophobic hate speech.”

This was a topic I wanted to ask Raimond Britz-cis about it also. He is the EPP Group’s Head of Social.

Raimonds says his community of EPP Group MEPs of which there are 217 along with their team of Press Advisors and Social Media Managers use social media to talk about Brexit and they also monitor sentiment about the topic.

In this part of the show I usually give shout-outs to brands, organisations and individuals whose work online is worth talking about.

In today’s show I’m sharing three commentators on Brexit that I follow on social media.

I follow Manfred Weber, Chairman of the EPP Group, the EU Parliament’s largest political grouping on Twitter. @ManfredWeber tweets a lot about Brexit, for obvious reasons, but the multi-media content including text graphics, videos and media links point me in the right direction for what I want and need to know.

If you take a look at the blog post associated with this podcast you will see a tweet from Manferd setting out the EU Parliament’s seven negotiating red lines on Brexit.

For us there are 7 negotiating red lines on #Brexit. It’s clear: without @Europarl_EN‘s green light, there will be no EU-UK agreement. pic.twitter.com/LMhpMmJQOn

Politico Europe a one-stop shop for news and views on Brexit. It is a Brussels-based European affairs weekly newspaper. It is the successor of European Voice, which changed in April 2015 after being acquired in December 2014 by a joint venture between United States-based political publisher Politico and Berlin-based Axel Springer AG.

They have a whole section on their website dedicated to Brexit.

I also follow Prime Minister Theresa May on Twitter for a direct view on Brexit. After all, it is Prime Minister May who will be leading the Brexit negotiations.

The Twitter account shares lots of video clips from press conferences, events and the House of Commons on Brexit. But surprisingly she (or her team) only tweet once a week at best and once a month at worst. Maybe they need the help of JSB?

Social Media Tool of the Week: Clips by Apple

The social media tool that saved my working week is Clips by Apple.

Clips is a new iOS app for making and sharing fun videos with text, effects, graphics and even music tracks. It’s perfect for Facebook and Instagram because of its square video dimensions.

With a few taps, you can create and send a video message or tell a quick story with animated text, graphics, emojis and music.

Its features include cool editing controls and effects as well as voice-transcribing auto-captioning. You can also upload your finished video directly to Instagram, YouTube and Facebook.

I love it for making fun videos about digital and social tips and tactics as well as mixing personal JSB digital tales!

Download it now and have a go at making your first Clips video – it’s available from iTunes for FREE!