No policing of the Eighth Amendment Referendum debate on social media by oversight bodies, but there’s definitely a battle of share of voice to be won. An analysis of the role played by social media in the referendum to be held in Ireland on Friday, May 25th 2018.

As a former journalist and PR practitioner and now as a full-time digital communications consultant, I decided to combine my skills to take a closer look at how the divisive Eighth Amendment Referendum debate is evolving online and the role social media plays.

This blog post is based on my own opinions and observations. The information has been collated using social listening tool Talkwalker Quick Search from available open source data on the social networks.

The Irish Times reported (March 30, 2018) that the oversight bodies in the 2018 Referendum will not police social media.

“Neither the Referendum Commission nor the Standards in Public Office Commission will have a role overseeing social media campaigning or advertising in the abortion referendum.”

However, in my view, there is a significant share of voice battle to be won on social media, and on Facebook and Twitter in particular. I believe this will have an impact on the final referendum result on Friday May 25th.

The role of social media in the same sex marriage referendum

The last referendum in Ireland took place in 2015, and it was, it could be argued, equally as divisive. I’m not referring to the age to qualify to take up the job of President, but the amending of the Marriage Equality Act.

Social media played a role in this vote and the #HometoVote campaign went viral. The end result marked an historic change in public attitudes and a record number of young people came out to vote. 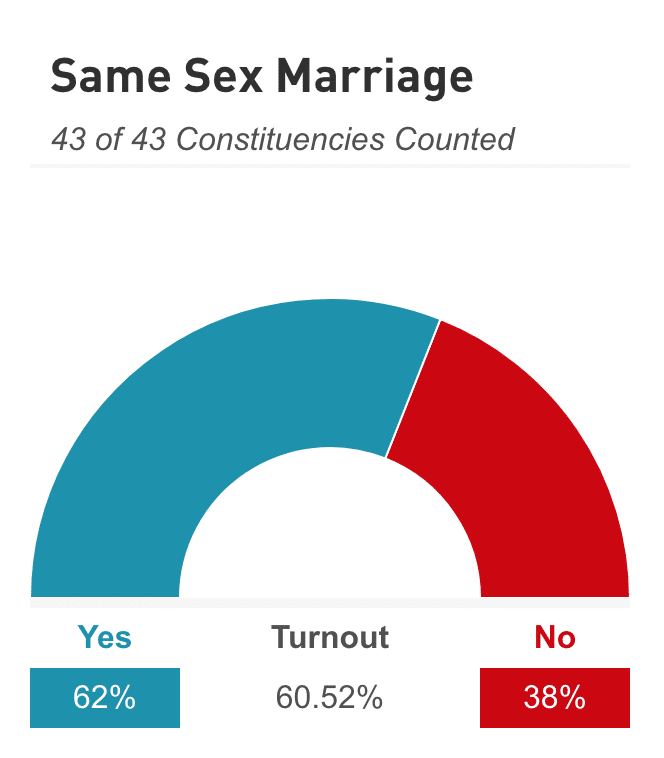 Speaking to me on my podcast JSB Talks Digital about the role of social media in the final vote outcome, Craig Dwyer, fellow with Social Change Initiative and previously Social Media Director, for ‘Yes Equality’, noted the central role of social media.

“Social media played a huge role, not only in the result, but in the campaign as a whole. When you thought about our target voters, the younger age profile, we knew social media was going to play a big role. As the campaign progressed the momentum grew starting with the register to vote campaign on social media, used as a way to reach all of our target audiences around the country. Not only was a tool to communicate our key messages, it was a tool to mobilise and organise.”

The role of social media in voter decision-making

There is no doubt the referendum on whether or not to repeal the Eighth Amendment from the Irish constitution will be influenced by social media. Whether you agree or not, the statistics speak for themselves.

There will be commentators who will claim ‘echo chambers’ of activity, whereby social media users will be drawn to social media accounts that reinforce their own biases.

Nevertheless, a huge importance in any referendum is placed on turnout and voter demographics.

As I already mentioned, the Same Sex Marriage Referendum of 2015 was highly influenced by younger voters and this campaign will also rely on a large younger vote.

I’ve been taking a look at the current state of social media play in the main referendum camps and analysed the available open data on the social networks around the three main hashtags: #Repealthe8th, #Savethe8th and #Together4yes.

If you were raped and have an abortion you’ll get 14 years in prison while your rapist will walk free after 2 or 3 years. Ireland is so backwards #repealthe8th

I’m pro-life and I’m voting no in order to retain the 8th amendment because I believe as human beings we should look after one another and do what’s best rather than offer temporary solutions with major consequences in the future mentally for these innocent women. #Savethe8th

I added in a third hashtag, #Together4yes, a relatively new voice in the campaign. The #Together4yes grouping describes itself as the “National Civil Society Campaign” promoting a ‘Yes’ vote.

It seems their social share of voice has a lot of catching up to do, however, with the support of the Taoiseach they are already gathering early momentum.

On May 25th Irish people will have the chance to make change in our constitution – to trust women and trust doctors. A Yes vote will mean a safe, legal, doctor-led system for the termination of pregnancy will be introduced in Ireland #Together4Yes

I set the following rules on my search queries:

Each campaign is colour-coded as follows and reflected in the results graphs: 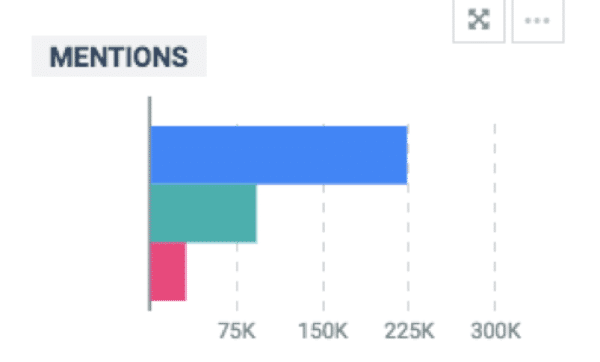 Mentions refers to the number of times the hashtag has been used in posts. In the graph below you can see that the campaign with the highest number of mentions is #Repealthe8th, followed by #Savethe8th and lastly newcomer #Together4yes. 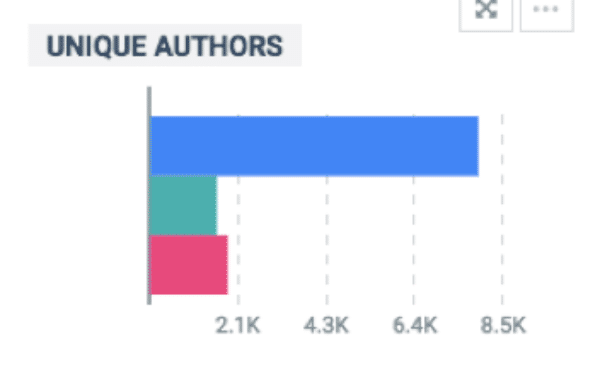 Unique authors refers to the number of individual authors connected to each hashtag.

When reviewing the top platforms used by these unique authors, it’s clear that Twitter is the dominant social network. 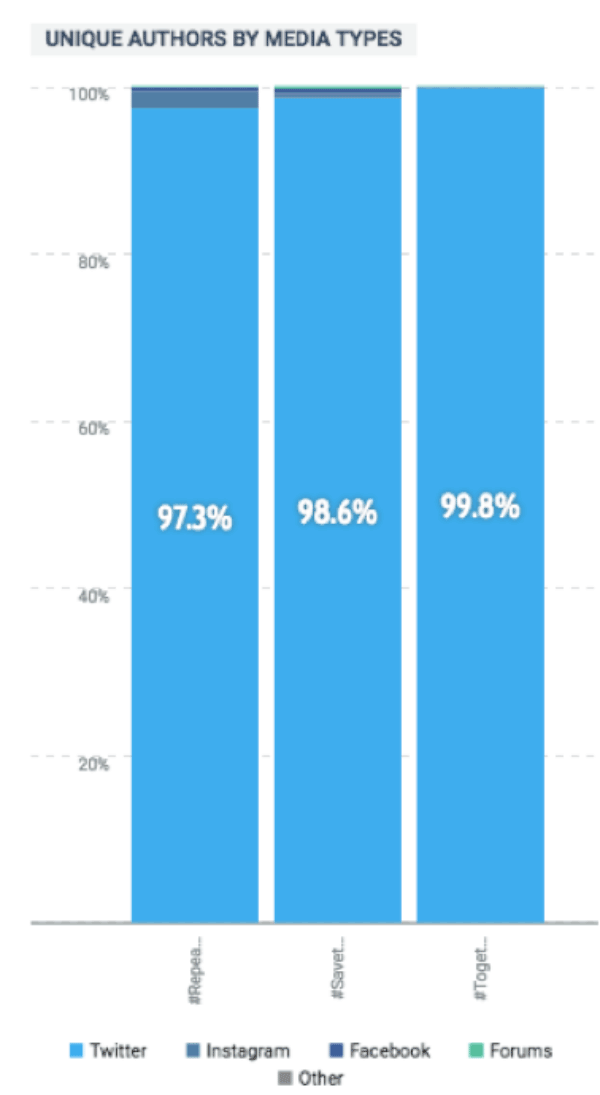 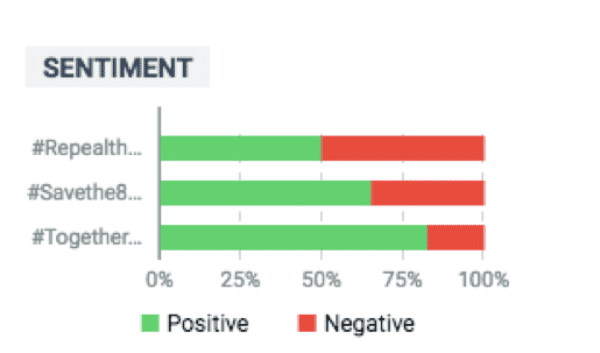 Sentiment refers to the negative and positive attitudes displayed and language used through social media activity for each campaign. It’s important to add a cautionary note here: given the divisive nature of the debate, there is a lot of negative language used by all sides. So people criticising the existing law (but promoting a ‘Yes’ vote) could be classed as negative and vice versa. 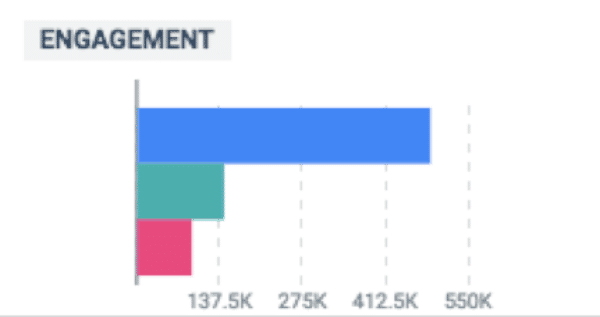 Engagement refers to the level of comments, likes, retweets and replies each hashtag receives.

Top themes refers to the topics associated with the hashtags. In the graphics below, I analysed noun phrases only. For the #Savethe8th campaign, ‘human rights’ is the dominant theme, while the #Together4yes campaign’s top theme is ‘Irish people’ and finally the #Repealthe8th campaign contributors focus on ‘sexual assault’. 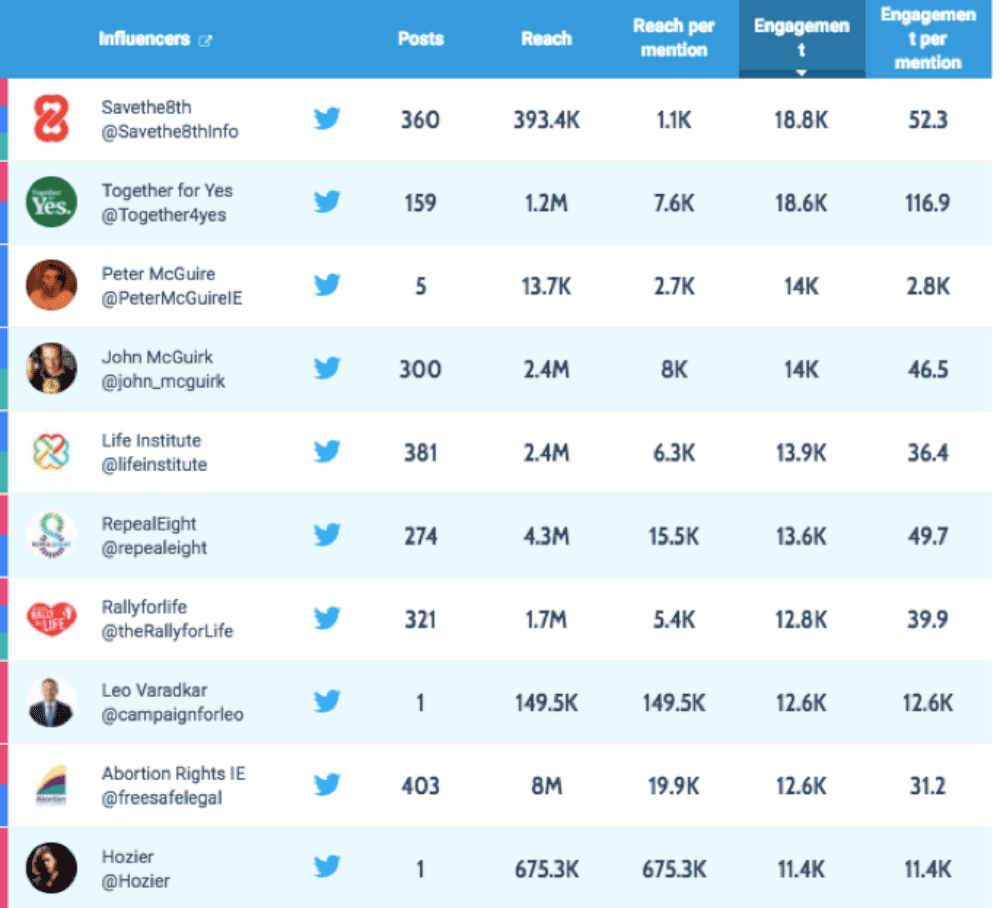 The male/female split for each campaign hashtag are below. Perhaps not surprising the female voice is loudest in each campaign. 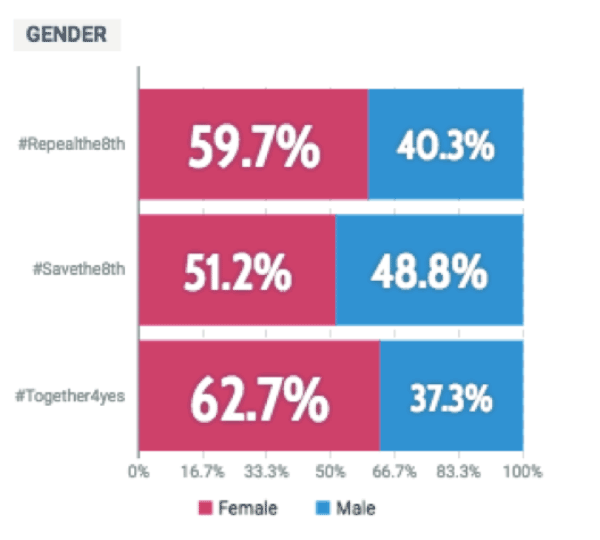 The age breakdown for each hashtag are below. 80% of the conversations on social media using the hashtag #Repealthe8th and #Together4yes are aged 18-34; meanwhile, 72% also fall into this age bracket for #Savethe8th. 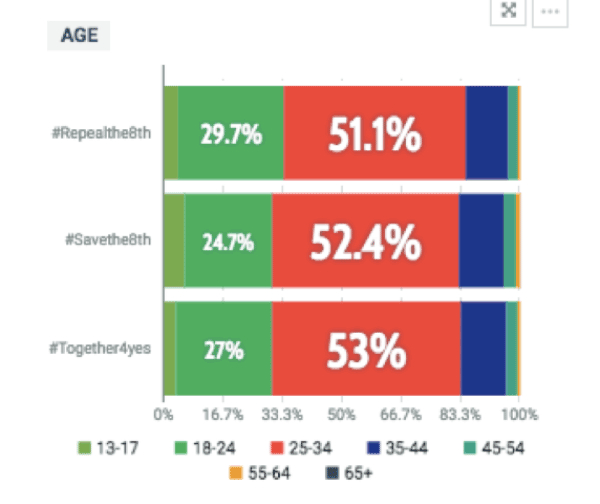 When I look at the interests of those engaging on social media we see that family and parenting and politics are most dominant comprising 41%, 47% and 40% respectively for #Repealththe8th, #Savethe8th and #Together4yes. 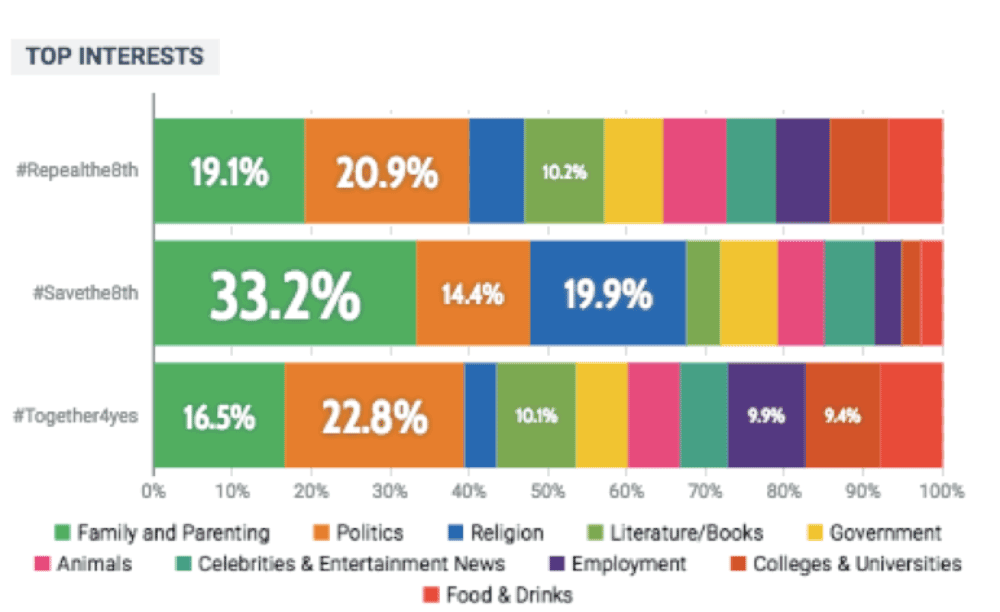 The final metric I reviewed for this blog post is occupations. Interesting to note that journalists come in at 10% or less of the occupations listed. 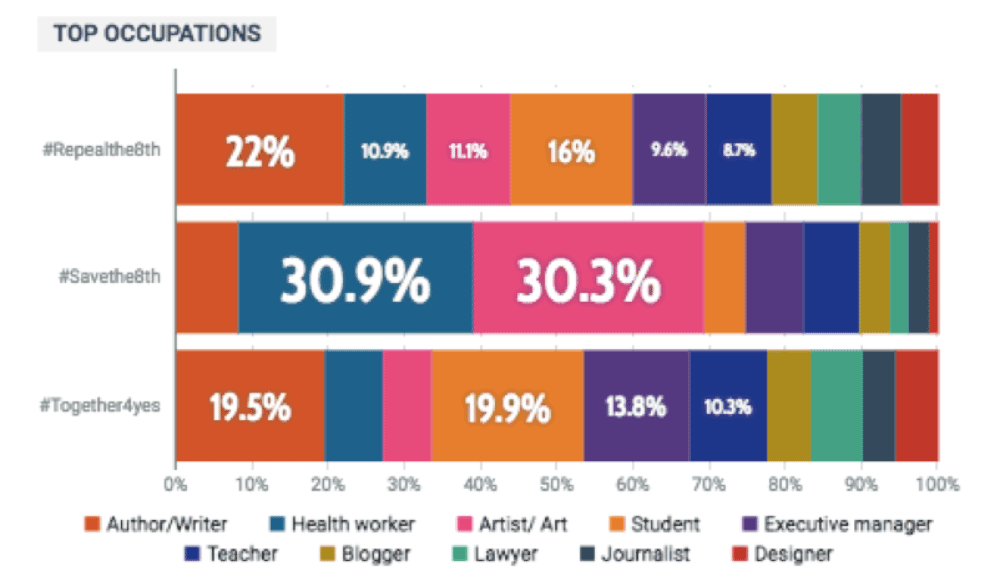 Moderating fake news online, so whose role is it anyway?

With the Referendum Commission and the Standards in Public Office Commission confirming that they will not police social media debates, there’s a real risk of fake news raising its ugly head online. Actually, let me clarify this. Fake news will make an appearance and it needs to be counteracted. But whose role is it?

Obviously the social networks have a role to play, but we cannot rely on their machine learning algorithms or manual reviews to spot and stamp out fake news. That is a given.

The media have a huge role to play in the protection of the truth. They stand front and centre on behalf of the people in reporting and protecting fact. Their role in society has never been so important than in the Digital Age. Moreover, we know that 41% of Irish people get their news from Facebook. This is followed by YouTube (18%), Twitter and WhatsApp – both at 11%. (Reuters Digital Institute, News Report, 2017).

The campaigning bodies should uphold the truth and we as citizen journalists should try as best we can (because let’s face it, some of the fake news reports look authentic) to seed out the truth.

A recent Twitter poll by the Irish Medical Times asking GP’s if they would “Support the introduction of abortion on request up to 12 weeks of pregnancy” saw a 78% yes vote. However, those of us in the know about social media can tell you that a public Twitter poll, not matter who you direct the questions at can be answered by anyone using the platform.

As a medical practitioner, would you support the introduction of abortion on request up to 12 weeks into a pregnancy?

Its results made the mainstream media before the mechanics of a Twitter poll were pointed out by Tweeters.

I intend to monitor the social media activity throughout the campaign and update this blog post during the campaign, and after the final result is announced.

I’d love your thoughts. What role do you think social media plays in helping you reach a decision or influencing your own commentary on the topic online? Do you contribute to online discussions or just follow them without commenting? How influential is the social media debate, in your view?

Please share your comments below. Please do not attack individuals or use abusive language or your comment will be deleted. I encourage free speech but please respect other people’s personal views. – JSB