What did Mark Zuckerberg tell MEPs about Cambridge Analytica?

This week I was at the European Parliament and so was Mark Zuckerberg.  45 minutes after he finished his session with MEPs, answering questions about privacy, data and also Cambridge Analytica, I decided to do a Facebook Livestream with my initial reaction.

European leaders and citizens alike eagerly awaited Mr. Zuckerberg’s arrival. Onsite in the EU Parliament, there was lots of conversations, high anticipation all day about what he might say. The format was very different as to what we saw in congress a number of months ago. So here’s my takeaways.

What did we learn?

And they all had three minutes to make their statements and to ask questions. Manfred Weber, who is the chairman of the EPP Group, started proceedings and asked three questions that actually were asked by citizens on the EPP’s Facebook page. And those questions were around whether or not Cambridge Analytica was an isolated incident? Can you convince the citizens of the EU member states that there aren’t other incidence of Cambridge Analytica that perhaps might come out?

So Mark Zuckerberg said that right now they have removed third party access to their API from tools that potentially were taking third-party data from individual users on Facebook. And they said that they’ll try and guarantee that it won’t happen again.

There was also some conversations around the fact that Facebook is a monopoly in Europe. So if you remember, Mark Zuckerberg was asked by a congresswoman in the United States, “Who is your competitor in the US?” And he couldn’t answer.

And we know that the European institutions are very, very strong on competition law, so this was a very interesting approach by Manfred Weber.

EPP Group Chairman Manfred Weber “is not convinced by Zuckerberg”

He did say that GDPR is the highest level of data protection right now in the world, and Mr. Zuckerberg said that he would indeed be complying with GDPR. So for all of those Facebook marketers and digital marketers out there who have asked this question thousands of times, because I’ve seen it in Facebook groups and forums and on my own news feed, Facebook are saying that they are absolutely going to comply with GDPR.

Some other interesting things that came up and the whole arena of Fake News and protecting democracy when it comes to election, Mark Zuckerberg admitted that they were very, very slow to the chase when it came to the infiltration by the Russians of the US elections.

He admitted that they were slow to react and that they are now putting new procedures in place because there’s a number of elections coming up, obviously we’ve got European elections next year, we’ve got elections in Brazil and also in other countries.

One of the things that they have already ruled out, and they’re testing in Ireland and Canada, is a transparency around advertising.

So right now, if you are served an ad on Facebook in Ireland or in Canada, you well actually see who posted the ad, why you were targeted, and how much they are spending. So you can see that that is going to create greater accountability and transparency where politics and elections is concerned, and that can only be a good thing.

Other things that came up were transparency, and again, Mr. Manfred Weber asked some pretty shrewd questions, I have to say. I know a lot of us digital marketing commentators were thoroughly underwhelmed when we watched the politicians in the United States question Mark Zuckerberg. We just felt that they didn’t get or understand his business model or how Facebook operated.

So Mr. Weber asked Mr. Zuckerberg, “Will you open up your algorithm? Will you open it up so we can have greater transparency about what your company is doing?” Now he didn’t directly answer that question, but it’s very interesting that Mr. Weber has put that out in the ether.

So we had a huge media scrum when Mark came out. He didn’t answer any questions. One journalist did shout at him and said, “Mr. Zuckerberg, we want to know how you’re spending advertisers’ money. We want more transparency, we want more accountability.” But with his entourage around him, he just went straight out the door and that was the last that we’ve seen of him. He didn’t engage with the media at all. 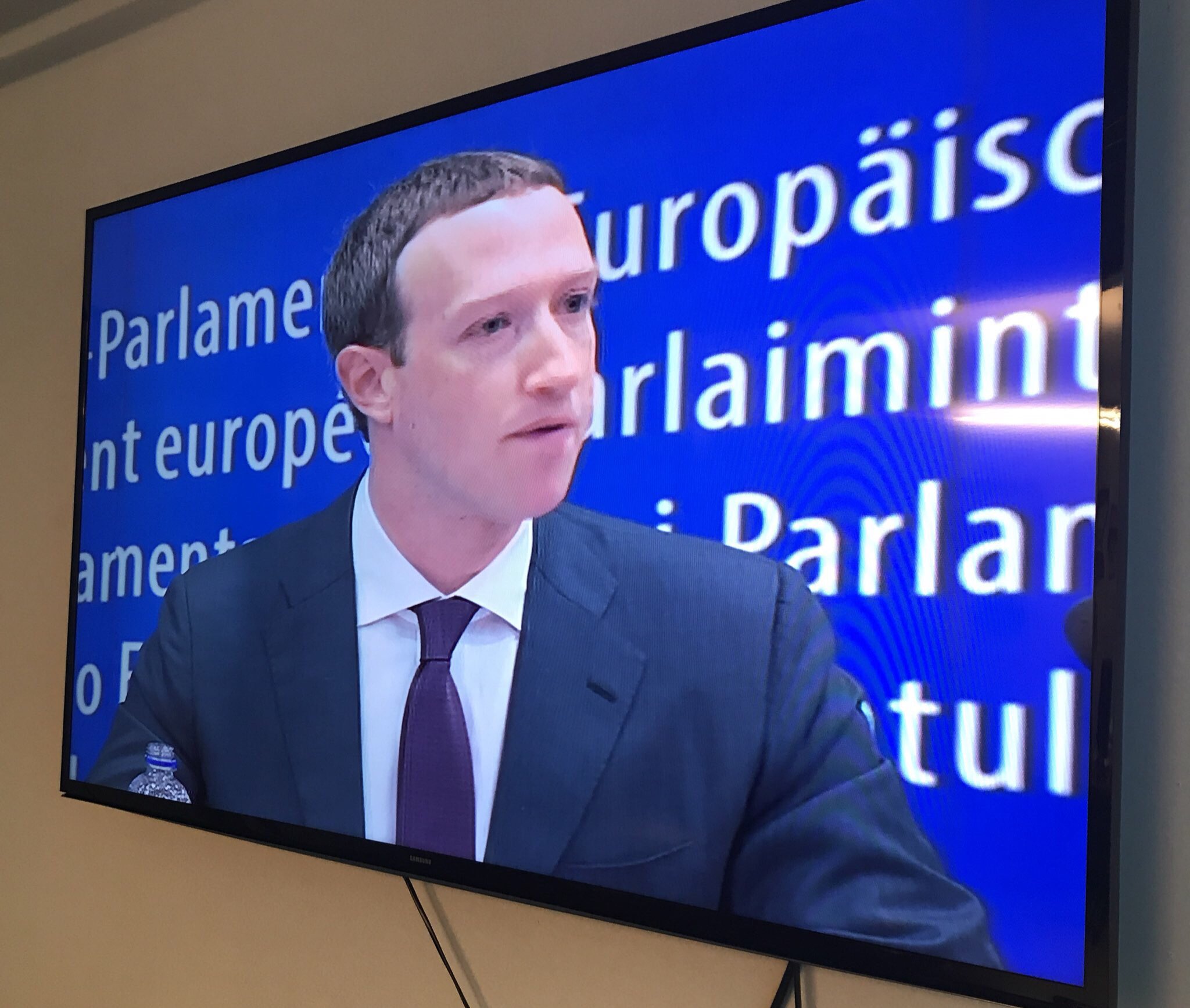 It will be interesting to see if he has any reaction on his own Facebook profile because we do know that he’s quite active there. So that will be very, very interesting.

Other take-aways from today, it was a very, very short session. Each of the politicians had three minutes, some went over of course, as they normally do. But I think that that took perhaps too much time and we didn’t get enough answers from Mr. Zuckerberg.

But I think it was a statement that Mark was making coming to Europe, trying to quell the fears among Europeans, but also among the very strong European institution, because if you think about it, Facebook have a very, very strong presence in Europe, their European headquarters, their business headquarters of Europe are in Dublin, as we know. Most of their engineers are in London, they have data centers in Denmark. They also have one in Ireland.

Europe is very important to them. It’s very important to them, but we know that the European institutions are also very heavy on data protection, on competition law, and also on protecting data of citizens and also upholding the truth because we’ve seen what’s happened in America. And many people on social media cannot decipher now between fact and fiction, and perhaps that’s a symptom and a new problem that social media has brought.

But there’s definitely a responsibility on the social networks to stand up. And I think that the European politicians or MEPs here today were trying to get some of the answers.

Journalist: Hey Mr. Weber, what did you think of Mark Zuckerberg today, do you feel reassured?

Weber: Facebook lost a lot of trust during the last month after the Cambridge Analytica scandal and to be present in the European parliament, to show up to try to explain is a good signal first of all. So Zuckerberg wants to win back trust and that is good.

On the other hand I have to say that he was not really convincing, he didn’t give clear answers on the questions on the table represented by the political families and that’s why we have to wait, there is absolutely a need of a follow up on this message.

Journalist: Do you think he took the European parliament serious?

Weber: He was present, we couldn’t force him to come to the European parliament but he was present finally. And that was a good thing though, to show that European consumers of Facebook are highly valued by Facebook. But finally it’s not about presence it’s not about to show relevance, it’s about content and what he told us today is that he would implement the data protection rules which will come into force in a few days so nothing more than what he as regulator already decided. That is what he promised, nothing more and that is not enough for the future.

Journalist: Now some self-reflection. Do you think that the European parliament gave a good performance?

And if say they would cooperate, if they don’t respect what we decided? Then they have to lift this even stronger regulations and strong implementation.

Journalist: So maybe you are thinking on the fines, that are the new regulation, privacy are contemplate?

Weber: I think for the big companies, for the internet giants, the fines which are included in the data protection regulations are really a big problem. We are talking about a lot of money.

Journalist: Mr Weber, apologies if you’ve already answered this question in German. But you were very clear in terms of Facebook perhaps having a monopoly presence, you mentioned WhatsApp and Instagram top three channels. Do you think that Mr. Zuckerberg and Facebook fear the European institutions in terms of potential for further regulation?

Weber: The European Union today is at the level where data protection privacy has the highest guarantees, especially when it comes to the European data protection rules which will come into force in a few days. That’s why Zuckerberg respects Europe, he knows that we are tough when it is about privacy.

The next step is about how the future world looks on the question of monopoly of Facebook. Facebook is owning already Instagram, is owning already WhatsApp. My simple question, are there competitors? Is there an alternative for European consumers when I want to be connected with my friends. He gave no answer on this so it looks like it could be a monopoly on the table and then with European competition law, we have to act.

Journalist: You also said that there should be follow up to this meeting. In what form and when?

Weber: Today’s question and answer was not really convincing, not enough. It was a start to the discussion with Facebook and that’s why we agreed on the written procedure that he has to clarify some of the very concrete points, questions from the collection, European parliament. We want to guarantee that privacy and data protection standards for our European citizens and today it was only a start.

Journalist: I don’t know if you replied to that question maybe also in German previously, but what did you think about Mark Zuckerberg not answering questions regarding the compensations for users, the privacy of the non-Facebook users?

Weber: One of the elements which are clearly on the table after the scandal is what is Facebook paying to those who are affected by such a scandal where their private data is misused by Cambridge Analytica. This question of compensation of the individual consumers and users of Facebook is on the table. They didn’t give an answer for the moment but they have to do so.

What do you think?

What’s your thoughts on Mark’s performance? Did our MEPs ask the right questions? Are you convinced that Facebook have our privacy top of mind?

Leave your comments below.