In this episode #113, I’m going big on social media management, why the juniors always get blamed for social media mess-ups, but why, in my opinion that’s a cop out!

* In JSB’s column: Don’t blame the junior! What we can learn from the Fianna Fáil fail on Twitter

* And find out what social media tool saved my working week 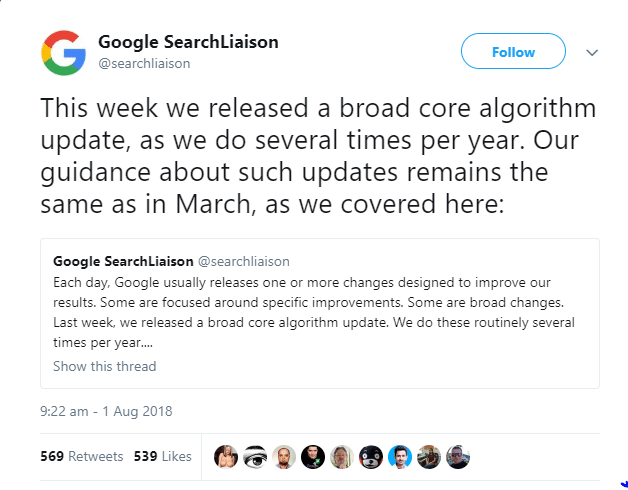 But the folks at Search Engine Land have been doing their own research and complementing what other SEO experts are saying, this update has seemingly hit what Google describes as “Your Money, Your Life” sites.

Suggesting there’s nothing drastic we need to do, Google says, “As with any update, some sites may note drops or gains. There’s nothing wrong with pages that may now perform less well. Instead, it’s that changes to our systems are benefiting pages that were previously under-rewarded.”

The graph is only going one way for Snapchat. Its recent quarterly results didn’t make for inspiring reading with daily user numbers falling for the first time. The decline comes after a controversial re-design which sparked outrage among committed users.

Facebook has redesigned the pages of more than 80 million businesses to make it “easier for people to interact with local businesses and find what they need most.”

The updated pages make recommendations about businesses include text, photos, and tags which are now more prominent.

Facebook is also rolling out enhanced features to show menus, book appointments, and other actions; expanding Events and job applications features; and rolling out Stories to all pages.

“These improvements are a small part of our commitment to help businesses connect with customers. We’ll continue to work on new ways to make these connections easier and more valuable to help all businesses grow.” 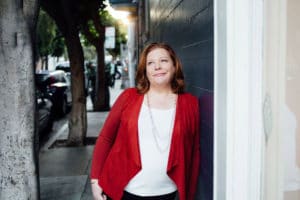 In this episode, I interview Lee Caraher, the founder and CEO of Double Forte PR & Digital Marketing, a 15-year-old national agency located in San Francisco.

The author of Millennials & Management: The Essential Guide to Making it Work at Work, Lee based the book on her experience with epically failing and then succeeding at retaining Millennials in her business.

Her second book, The Boomerang Principle: Inspiring Lifetime Loyalty From Employees, published in 2017, is a pragmatic and actionable guide to creating high-performing work cultures ready for the future.

In this interview we discuss how to handle a social media crisis, the role of strong leadership in developing online strategies and why there is no place for juniors in social media management. 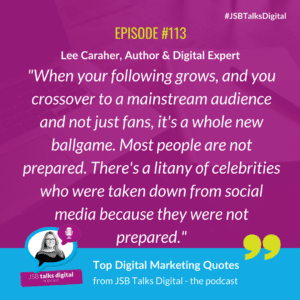 2) Know when to escalate

In this week’s ASK JSB, Michael wants to know the traits of a good community manager.

Listen in to hear my answer!

Also read my blog post on the attributes of a great community manager.

If you have a digital marketing or social media question, don’t forget you will have it answered on the show by using the hashtag #AskJSB on Twitter or Instagram. You can also leave me a voicemail with your question at www.digitaltraininginstitute.ie/askjsb.

And you can also post a message on any of my social networks!

He also said Fianna Fáil is in favour of the harm reduction guidelines released by the HSE as part of their #DoYouUseCocaine campaign.

“Let me get this straight. There are 1,000,000 (that’s ONE MILLION folks) on the waiting lists and the HSE are running campaigns like this? Perhaps HSE Ireland #YouAreOnCrack.”

The tweet, along with a follow-up tweet posted by the same junior member of staff tried to deflect from the original one stating:

“We are not saying it’s wrong. It’s the formulaic PR look of the campaign. How much thought did the HSE put into this campaign?” 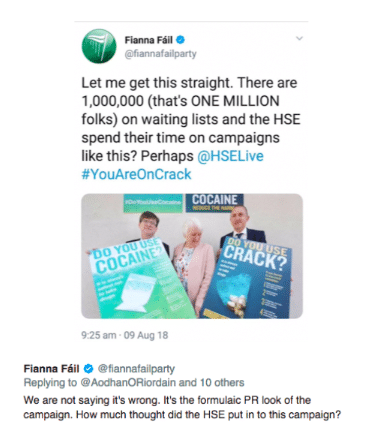 ? Would you have a junior member of staff mange your PR communications?

? Social media should not be viewed as a third-class communications channel. This is the mistake very often senior managers make because of their own personal bias towards social media.

? Often times I wonder if “juniors” get blamed when in fact the social media team get it wrong? I see it time and time again.

? Do organisations really have a community management strategy?

On a daily basis your community manager should be:

* Engaging and responding to public comments on social networks (where relevant)

* Analysing efforts to drive more traffic to your website

* Creating online relationships with other stakeholders and influencers

* Feeding data into the regular communications meeting where relevant

If you want to discuss your community management strategy then get in touch. Drop me an email to joanne@digitaltraining.ie.

Social media should not be viewed as a third-class communications channel. This is the mistake very often senior managers make because of their own personal bias towards social media | #JSBTalksDigital Click To Tweet

The social media tool that saved my working week this week is TChat.

Not only does tchat update faster than a normal Twitter feed, but it also allows you to “pause” your feed if things get too crazy.

Pausing the stream will allow you to catch up with the discussion if you fall behind. Once you’re caught up, click play to get the stream updating again in real-time.

Don’t leave it paused for too long – just because the conversation stops on your screen doesn’t mean it’s stopped on Twitter! Tchat also provides timestamps on each tweet so you know exactly what’s being said and when.

Thank you for tuning into episode #113 of JSB Talks Digital. If you are a regular listener I would love a review!

As always, I have everything discussed on today’s show on my award-winning blog at digitaltraining.ie

If you are interested in becoming a digital marketing pro and work in the public sector, check out my new Diploma in Digital Communications for Public Sector at: https://publicsectormarketingpros.com/diploma/ It starts on September 3rd.

Thank you for continuing to listen and don’t forget to get in touch you’re your questions. I love hearing from my listeners so don’t be a social media stranger!

I’m Joanne Sweeney-Burke. This is JSB Talks Digital. Thanks for listening and I’ll talk to you soon.